The ninth president of Claflin University says he plans to continue the institution’s upward trajectory in academic excellence and cultural engagement because that is required to produce global, visionary leaders for the future.

“I want to build on the legacy while transcending into the future, … standing on the shoulders of those eight giants that came before me,” Dr. Dwaun J. Warmack said during his investiture ceremony on Friday.

“This includes developing innovative curricula and academic programs, a real strong focus on learning outside of the classroom, opportunities that prepare our graduates for a global society, a global economy and a global workforce,” he said.

Warmack formally received the authority and symbols of the office of president during a morning ceremony held in the W.V. Middleton Fine Arts Center.

He has been president since Aug. 1, 2019. His investiture, which was originally scheduled for March 2020, was delayed because of the pandemic.

“It did not happen. I said since the beginning – delayed but not denied. God has a plan, and God’s perfect plan manifests for us to be here right now at this time,” Warmack said.

Warmack said he was going to make sure the university not only survived through the pandemic, but thrived.

“I accept the awesome responsibility to ensure that Claflin preserves and sustains its legacy while enhancing its prestige as one of the nation’s leading institutions for teaching, student success, research and public service,” Warmack said.

“We indeed did thrive, but we could not have done this without collective contributions from our board of trustees, our faculty, staff, students, alumni and constituents,” he said.

“I knew coming in I had big shoes to fill. From being ranked as a Top 10 HBCU by U.S. News & World Report to being ranked as the number one HBCU in alumni giving percentages, Claflin had an impressive list of achievements,” Warmack said.

He thanked Tisdale for his leadership and for mentoring him throughout the process of taking on his new role as president.

“I knew the challenges would not be easy coming to Claflin University to continue the university’s upward trajectory on a landscape of higher education, but I also knew elevation and transformation into the 21st century would be my focus and our goal,” he said.

Armed with a $53 million endowment, Claflin has experienced record fundraising, along with having also implemented innovative teaching and learning technologies, with a dedication to the science, technology, engineering and mathematics disciplines.

A new three-story student center, which will include a movie theater, eSports gaming lounge and conference center, is slated to open in 2023.

The president has developed what he calls the “five C’s” to help him navigate the school forward. They include: cutting-edge academic enterprise; continuous improvement on student engagement, student success and technology infrastructure; collaborative economic and workforce development; continuous global strategies; and consistent “friend raising” and fundraising.

“At first glance, elevation and transformation seems simplistic, but it will be the inspiration that will drive us to unimaginable heights and success. Claflin will be the engine of innovative approaches to solving problems on a scale not yet realized. Claflin will be the window that other folks will look through for leadership,” he said.

The president thanked the faculty and staff for their work in helping to move the college forward.

“We will do our best to ensure that the students that we serve are prepared to lead and transform the world. We will develop students holistically, that is academically, socially, personally and, here at Claflin University, spiritually. That holistic development of the students matters,” Warmack said.

He said the future of the university is bright.

“Claflin is poised to move up the list of Top 10 HBCUs. I want to be in the Top 5 as a regional university that just happens to be an HBCU. We want to be one of the best thought leaders in the country, but also rank among leaders and universities across the world, creating a global footprint that will put Claflin in a place that takes it to the next level,” he said.

Warmack said he needs the help of everyone to make his goals realities.

Claflin Trustee Board Chairman James Lehman said Warmack has served as the accomplished, energetic and visionary leader the school had been looking for upon Tisdale’s retirement.

While Warmack always says he stands on the shoulders of his predecessors, “Dr. Warmack has taken giant steps himself,” Lehman said.

Dr. L. Jeffery Perez, president and CEO of the S.C. Independent Colleges and Universities, said, “I was impressed by his leadership. I was inspired by his vision,” noting he looks forward to Warmack’s legacy in continuing the college’s “skyward trajectory.”

Claflin Student Government Association President Lauren Tolbert said, “I hope you will continue to inspire us with your Claflin magic.”

Dr. Leo Twiggs, a Claflin alumnus and its artist-in-residence, presented Warmack with a special painting, while state Rep. Dr. Ivory Thigpen presented him with a House resolution recognizing Warmack’s leadership and new role as president.

The president and his family, his wife, LaKisha, and their young daughter, Morgan, were also treated with a surprise parade following the investiture ceremony. 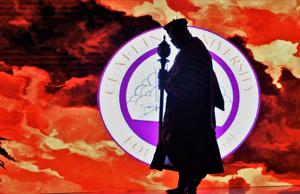