The announcement came during special called meeting held via teleconference on Thursday. The board met in executive session for nearly two hours before returning to make their decision.

“This is our time. I am a man of faith, and I am certain that President Conyers has been chosen to lead this university for such a time as this. Alexander Conyers is ‘the righteous way’ for S.C. State,” board Chairman Rodney Jenkins said.

“Now we cannot take our feet off of the gas. Because of his leadership over the past nine months, this university has already begun its ascension as the first choice for men and women who desire to receive undergraduate, graduate and doctoral degrees in their chosen career fields,” Jenkins said.

The trustees who were available for Thursday’s full meeting also voted unanimously for Conyers.

Conyers, a retired U.S. Army colonel, was named vice president for strategic alliances and initiatives at S.C. State in April 2021.

He became acting president in July 2021 after former president James Clark was ousted. Conyers was named interim president in August.

Jenkins said, “This board and President Conyers continue to have the support of our state and local lawmakers, corporate and business partners, and most important, the approval and support of our faculty, staff and students. With this level of ‘buy-in,’ we can’t help but to succeed.

“I say thank you to this board for being bold and for making the decision that will provide this university with a sustainable leader who is capable of going the distance for S.C. State. Thank you to all of our stakeholders who raised their voices and let us know what and who they believed was the right person for the job. Your feedback continues to be valuable as we pave the way forward.”

Former S.C. State president Dr. Leroy Davis, who is an alumnus, said he wishes the university – and Conyers – well.

People need to support the university’s growth and development in any way they can, while “letting the board handle the leadership issues,” he said.

Davis noted that everyone’s top priority should be whatever is best for the students.

“That’s the bottom line – to do all that we can to ensure that this generation of students is competitive and can represent the values that we hold very dearly as alumni of South Carolina State University,” he said.

Davis said the university has made strides.

“I try to support the university myself where I possibly can. They have certainly been much more aggressive in their fundraising, and I think that’s a positive thing. I see positive things happening at the university, and I want to do all that I can personally to make sure that I am supportive of my alma mater,” Davis said.

Conyers “has the right leadership skill set, great rapport with the alumni and public and interacts well with members of the South Carolina General Assembly,” Govan said.

“I think since Interim President Conyers has been there at the institution, he, along with the board, has blazed a path that I personally feel will bring South Carolina State back to some facsimile of the greatness that we’ve required and we’ve retained for decades,” Stephens said.

He continued, “Reaching out to bring students in from across the United States and around the globe, the institution has done tremendously in that arena of marketing itself. … Marketing South Carolina State University is going to be one of the ways by which the institution becomes a vital part of the community and the state of South Carolina, as well.”

Stephens said he applauds the board for its “bold jump” in naming Conyers president.

“Mr. Conyers has done great in my opinion. I just see us building upon that. He has made some inroads into the South Carolina General Assembly. He has made inroads into other states and business partners. So I see this as a great opportunity for the institution to continue to come back to its roots,” he said.

Stephens continued, “I’m very proud. As an alumnus, I am ecstatic that we have come to this point and that we can look positively to the future. It’s amazing what he’s done in that short period of time, from bringing kids back who only owed a couple hundred dollars, and using some of those funds that we got from the feds to offset those kids’ tuition and bring them back to the institution.”

State Rep. Gilda Cobb-Hunter, D-Orangeburg, said she, too, wishes Conyers well and hopes that he is successful in his role as president.

“I wish Mr. Conyers well and look forward to working with him as I have with all of the previous presidents to move South Carolina State forward. I am hopeful that he will surround himself with a very strong team academically to ensure the success of his administration,” Cobb-Hunter said.

“If he’s able to assemble a strong leadership team with experience in higher education, then he should be quite successful,” she said.

Helen Corbett-Brandyburg, a member of the alumni association’s Atlanta chapter, believes it is Conyers’ time to lead.

He rose from private to colonel as the leader of the Army’s largest military police brigade. He led over 3,600 soldiers and civilians across four military installations: Fort Bragg, North Carolina; Fort Stewart, Georgia; Fort Campbell, Kentucky and Fort Drum, New York. He was also responsible for the safety of the Fort Bragg community, with a population of over 100,000 personnel.

Before joining S.C. State, he worked in Washington, D.C., in the Senior Executive Service as the deputy assistant secretary of the Army. In that capacity, he led the Army Review Boards Agency, which serves as the highest administrative level for review and appeal of personnel actions taken by lower levels of the Army.

Conyers previously served as a member of the SCSU Board of Visitors, chairman of the Student Relations Committee for the SCSU National Alumni Association and a member of the Criminal Justice Advisory Committee. He was featured as a 2016 honoree on the Stellar Alumni Calendar.

He has also been inducted into SCSU ROTC Hall of Fame and served as the president of the Washington, D.C., Chapter of the National Alumni Association.

He is a graduate of the FBI National Academy and The University of North Carolina’s Leadership, Excellence and Development program. He is a member of several professional associations, including the American Association of Blacks in Higher Education, and a former adjunct professor at Upper Iowa University. 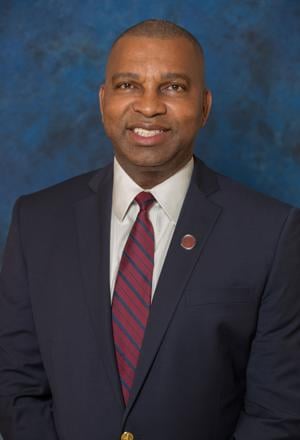