STORIES OF HONOR: Above and beyond: Bowman soldier discovers inner leader in Army

/ Blog / / STORIES OF HONOR: Above and beyond: Bowman soldier discovers inner leader in Army

STORIES OF HONOR: Above and beyond: Bowman soldier discovers inner leader in Army 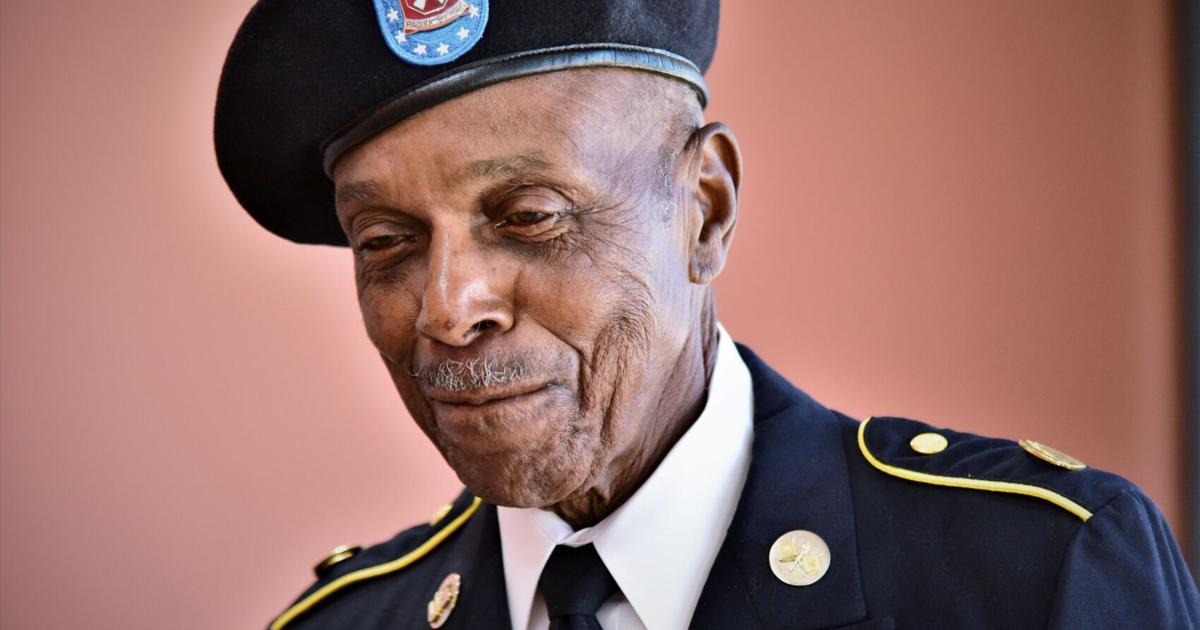 Retired U.S. Army 1st Sgt. Rogers Thomas was told he wouldn’t be anything more in life than a poor farmer, but the Army gave him an opportunity to go beyond the cotton fields of Bowman and become the decorated leader he did not always believe he could be.

Drafted into the U.S. Army in November 1959, Thomas received his basic training at Fort Benning, Georgia, where we was trained as an infantryman and a radio operator. After leaving basic training as a private, his first assignment was in Germany.

“I went to Hamburg, Germany, as a scout and radio operator. You would observe the enemy and, at the same time, you’d have to call and report in as to what you see. Most times it was at night. So you couldn’t really see the enemy,” Thomas said.

“You could see the machine gun fire as they fire in front of your jeep. Adverse weather didn’t make any difference. Seven days a week, 24 hours a day. I didn’t have to work 24 hours a day, but I’d go out every night basically. When you talk about time off, we didn’t have any time off — didn’t know what that was like,” he said.

Thomas said his time as a scout was shrouded in mystery and included the threat of enemy fire.

“There’s a lot of stuff that I can’t talk about because it’s still top secret. … He goes out and observes the enemy activity and report it back in, anything semi-hostile. You can’t fire back. We had loaded weapons, but you couldn’t fire back unless you’re fired upon,” he said.

Thomas continued, “As you ride in the jeep, if the bullet hit the jeep, then you could fire back. And before you could even fire back, you got to call and get permission. That didn’t make any sense at all, but the military decided it made sense.”

Thomas spent two years in Germany before leaving the military in hopes of returning to his communications job at BellSouth Telephone Company in New York.

“As a draftee, you spend two years in the military and you can get out. I was working for Bell Telephone. That’s how I ended up with my communications skills. … I came back to the same job that I had, (but) the job was filled by somebody else. So I didn’t have a job. I volunteered and re-enlisted back into the military. And from there, 29 years and eight months later, I became a civilian again,” he said, smiling.

Thomas had re-enlisted as a sergeant.

“In two years I made sergeant. … They sent me to signal school because they realized then that communications was my field,” he said.

The U.S. Army Signal School provides military education and appropriate practical training for men and women in the Armed Forces to prepare them for positions in communications-electronics activities and familiarize them with the application of doctrine, tactics, logistics and electronic techniques pertinent to the military command and control system.

“They sent me to Fort Knox, Kentucky, to basic radio operator school and to become a repairman,” he said, noting that he became not just a radio operator.

“I’m the supervisor as a sergeant. So they sent me to NCO Academy. You have to go to a leadership school because now you’re in the ranks of leadership,” he said, who would soon train and educate future non-commissioned officers to be fit, disciplined and ready to lead in their respective environments.

“That was a 16-week school. From there, I was assigned to Fort Dix, New Jersey, as a drill sergeant. Again, all this is building up to leadership. I came on orders to Germany again. That’s when the Berlin Wall was up,” Thomas said.

The Cold War, a period of geopolitical tension between the United States and the Soviet Union and their respective allies, the Western Bloc and the Eastern Bloc, began following World War II and ended in Berlin on Nov. 9, 1989 with the fall of the Berlin Wall.

Thomas recalled his service before the wall’s fall.

“They sent me to tank commander school and from there I went to Berlin, Germany. I spent my whole tour inside of a tank. I ate, slept, whatever, inside of a tank for two years. The only exercise you get is when you get out the tank to go to the bathroom,” he said.

The experience was miserable and stressful for him.

“Imagine yourself being a mole in a hole. You’re in a tank. The only communication you have is with people that’s surrounding it. So I can imagine what the communist soldiers feel like when they have to go in a bunker,” Thomas said.

STORIES OF HONOR 2020: The Times and Democrat highlights the service of our local Veterans

He continued, “From there, I went back to Fort Knox, Kentucky, to another phase of signal school. I’m probably a staff sergeant now. So leadership increases. I got promoted to sergeant 1st class. So now that’s another assignment to Korea. When I got there, I was the youngest person that the Army had that was put in the position of 1st sergeant.”

“I was a ‘fixer.’ That’s what they called it. Go fix this, go fix that. So while I’m in Germany, after I got finished fixing, they sent me to Fort Bragg, North Carolina. That’s another communications school. So when I got there, instead of taking up a job up in administration, they put me in a unit,” where Thomas stayed for approximately nine months before being sent back up to brigade headquarters, he said.

Thomas’ leadership and skills did not go unnoticed by his commander.

It was then that he discovered the U.S. Army was not as fun as it once was when he first entered.

“Now I’m no longer having fun. So I decided, ‘You know what? You’ve been real lucky. You missed two trips to Vietnam. Never got shot on. Got shot at, but not on. Never got hurt. You better go home.’ So in 1985, I decided to retire,” said Thomas, who officially retired in April 1986.

He recalled his time as a cook at the White House and as a communications specialist at the Pentagon.

“I was in the aircraft on the way to Vietnam. They discovered I had two uncles already in Vietnam, and I was diverted from Vietnan. … They put me off at Fort Lewis, Washington. I went back to the White House as a cook. That’s how I ended up as a cook at the White House and a signal guy at the Pentagon,” Thomas said.

“As a cook at the White House, they have special meals. They had exotic meals, stuff that ordinary people don’t eat. It’s a military cafeteria. … You know a month out in advance as to what’s going to be on the menu. I knew how to cook before I even went in the military,” he said.

Thomas worked in the communications shop at the Pentagon.

“I kept communications. That was after I re-enlisted. As matter of fact, when I was at Bell Telephone in New York, I wasn’t fixing radios … I installed cable. … My job was a hazardous job. It wasn’t one of those luxurious jobs,” he said.

Looking back over his nearly 30-year tenure in the U.S. Army, the 84-year-old Bowman native who now lives in Orangeburg said he liked best the opportunity that the military gave him to develop as a leader.

“Going to school in Bowman, South Carolina, teachers told me, ‘Boy, you’re not going to make it. You might make it as a farmer,’” he said.

“Then once I got in the military, you probably can just see the awards and decorations that I acquired. I didn’t think that I could do it. I outranked all my uncles that were in the military. If you talk about numbers, none of them exceeded sergeant,” Thomas said.

He continued, “I had one uncle stayed 25 years in the Army. When he retired, he retired as a buck sergeant. A buck sergeant is three stripes. When he sees me, he just laughs and says, ‘Boy, I’m sure did you good.’”

“People of high rank in high places, if they would see me today, they would say, ‘I told you, keep looking up.’ They told me that,” said Thomas, who has kept looking up and occasionally visits former teachers, including a 98-year-old, who once told him he would not amount to anything.

“I’m always courteous about it when I see them. I hug and kiss them, and I feel good about it. They say, ‘Boy, you did me well.’ That makes you laugh. I smile,” Thomas said.

While his jobs at the White House and Pentagon are among the things he has enjoyed least about his military experience, he said if he was called to perform his service all over again, he would.

“But I probably wouldn’t enjoy it as much because there’s so much restriction on what you can do. … You can’t chastise soldiers in the Army anymore. You’re so restricted.

“The soldiers do it as a job. It’s not an honor, per say. Most of the kids that go in say, ‘Well, I’m going in because I can get an education.’ They’re more concerned about that than serving the country,” Thomas said.

Thomas said being a part of The T&D Stories of Honor series meant much to him and gave him a chance to share an experience which helped him become the man he always knew he could be.

“It makes me feel good to tell somebody about my experience. Just looking at me, you wouldn’t know that I’ve been there and done that. As a matter of fact, I wish I could just go back in time,” he said.

“By being so young, I really didn’t know what I was doing, but I learned real quick. I knew what’s right and what’s wrong. You got books. Buy a book, read up on this if you got a question. … I learned real quick if you’re smart and you use it wisely and don’t abuse it, then you can use it. … With hard work and being honest, you can go anywhere,” Thomas said.

He and his wife, Ora, are the parents of three children: daughters, Starlena and Sheila, and son, Leanduwin. They are the grandparents of 10 and are also great-grandparents. 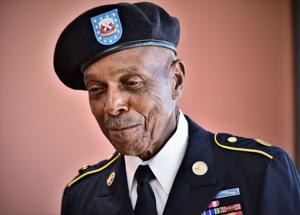 Hospital offering discount on balances; official: ‘50% of something is better than 0%’